DAD’S MESSAGE TO ME 38 YEARS AFTER HIS DEATH

With Father’s Day 2018 approaching, it is natural for many of us to think about our dads. Some of us only have cherished memories of days long gone, and others are blessed to still have the opportunity to visit and/or talk to their dads on earth.

I happen to fall into the category of having fond memories of my dad from long, long ago, so I want to share a true story about a message I received last week—thirty-eight years after his death in 1980.

Before I share the story, I have a simple question. Do you believe in God-winks—those surreal situations where you experience something akin to divine intervention?

Some folks tend to brush-off such situations as mere coincidences, but if you’re a person of faith, you probably understand how special God-winks can be. I certainly do because I’ve experienced them—many times in recent years. I feel sure some of you have also had such experiences

For those who do not believe in God or God-winks, please keep reading before your close your mind completely to the possibility that God-winks may be far more than mere happenstances.

I was twenty-seven when my father had his first heart attack and could no longer work—he was forty-nine. Unable to exert himself physically, he started tinkering with lightweight metal sheeting—copper, tin, etc. in his workshop.

After Dad’s fourth heart attack in 1980, God called him home to the big workshop in the sky. Dad was fifty-four-years young.

I struggled to understand why God called Dad home at such a young age. Dad had so much more goodness to give others. I prayed many times for God to help me understand, but all I received was silence. I soon became frustrated—one might even say angry, which severely challenged my faith. The big unanswered “WHY?” question clouded my sense of being for many years.

A few months after Dad’s funeral, my mother asked me to get rid of things in Dad’s workshop. The task proved to be more emotionally difficult than I could have ever imagined. Still in a state of numbness from Dad’s passing, I packed items in a few boxes and gave some to family and friends.

I kept a few of Dad’s tools only to have them stolen in 2005 when some “kindhearted soul” stole my truck with Dad’s tools on-board. Those tools held many memories, and every time I used one, I thought of Dad and smiled.

Now, fast-forward to 2011—the year I felt the “call” to write my first novel, If Tigers Were Angels: With God All Things Are Possible. Trust me when I say, I had never in my life had any desire to write a manuscript, let alone publish a book. However, “something” kept prodding me to write the story. I tried to ignore this strange “calling” only to find myself involuntarily pounding away on the keyboard one evening. The rest is history as new ideas kept popping into my head and I couldn’t stop writing, even though I had no idea where the story was going—something was leading my thoughts from one chapter to the next.

The result of this mysterious joint effort produced a story about a middle-aged man who received messages from God through an unlikely source—a Tiger Swallowtail butterfly. If you care to get a better understanding of the story, please go to the Amazon.com “Look inside” feature about the book. 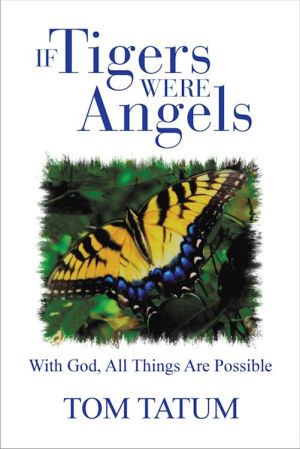 In the last chapter of my novel, I describe an actual encounter I had with a real Tiger Swallowtail when I suffered writer’s block in the middle of writing the story. It was one of the most surreal moments in my life to that point. The book’s cover photo is the actual Tiger that appeared that day. My experience is one I hope I never forget.

In late May 2018, I started cleaning out my garage. A task long overdue, but in the process, I found a box marked Dad’s Stuff. The box had remained closed since 1980 and I had no idea what was inside. I hesitated to open the box for fear of revisiting some sad times. However, I felt compelled to open it—pushed, as if some force was urging me to break the seal.

The first item I saw in the box was a copper figure of a Tiger Swallowtail perched on a leaf (see photo). My eyes quickly swelled with moisture as I thought of Dad having made the Tiger. I wondered if Dad had received messages from a Tiger after his heart attacks. Could it be that the “call” I sensed to write my novel came from Dad? Could Dad have made the Tiger to convey a special message to me thirty-eight years later? Could Dad’s copper Tiger be a “God-wink” moment for me?

The naysayers of the world will likely say it was a silly coincidence and I’m a fool to think otherwise, but I believe that’s wrong. I have no doubts it was a special moment of divine intervention and ranks as the most surreal moment in my life. I’m feeling blessed to have discovered Dad’s special gift and understand his message of inspiration.

My only regret is it took me so long to find Dad’s gift that was literally right under my nose for years. After struggling for thirty-eight years to understand the answer to my “Why?” question about Dad’s early departure, I am finally at peace. I sincerely believe God used Dad’s copper Tiger as a messenger to tell me who guided me through the writing of my novel—it was Dad. It’s nice to know you’re still watching over me. Thank you for your guidance, wisdom, caring, and love!

Happy Father’s Day, Dad, and to all who are blessed to wear the title—FATHER.

If you have been kind enough to follow my blog, aTimeinLife, I am truly thankful for your support. I hope you have found the blog’s content inspirational, motivational, and heartwarming—maybe even interesting. If you’re not following my blog, I invite you to signup—it’s free!

Happy Father’s Day to all the dads out there!