TEAM – a simple four-letter word a child can say without getting into trouble—no matter how young they are. In fact, the sooner a child understands the importance of the TEAM concept, the better. The old cliché “all for one and one for all” might be a bit trite, but when it comes to TEAM, it’s an absolute requirement for success! Otherwise the team fades into a blur…

Every person (player) on a team has God-given talents and they should use those talents to the best of their ability to help contribute to the overall outcome of the team. Adults should teach youth to play as a team—to win as a team—to lose as a team. If a child’s talents vaults him/her to shining-star status, that’s great for the player and the team, but the child should remain true to the team concept.

Unfortunately, being a good team player is not always easy for our youth—thoughts of “self” takes control of the mind sometimes. The following personal experience is a perfect example of the importance of each individual’s contribution to the team.

Throughout my youth, I thought I was a good team player. I played on baseball teams for many years; I was confident that I knew the team concept very well. Sometimes I was a shining-star and sometimes I was the goat, but I always supported my teammates and the team above self. However, when I participated in a Leadership/Team-Building exercise as a teenager, the results were most humbling. I allowed “self” to cloud my judgment.

I was involved in an exercise on a team consisting of six guys seated at a round table. For this particular task, the instructor gave each person a puzzle consisting of ten pieces. The object was for all six members of the team to assemble their individual puzzles as fast as possible. The one condition given to us was there could be no talking among team players, but all players could use gestures.

The clock started and I completed my ten-piece puzzle very quickly. I sat there wondering why the other players were having such a hard time completing the simple task. Each of them had all but one of their pieces in place. I shrugged my shoulders at them in a gesture of “come on guys—what’s wrong with you people? Time is running out!” They all began pointing at my completed puzzle, raised their index finger, and then pointed back toward themselves. Remember—no talking allowed.

Several minutes passed, and their gestures became a bit more animated. A few more minutes passed and the instructor asked me if I was finished.

“Are you sure about that, Mr. Tatum?”

Yes, I was sure; the puzzle was right in front of me. Was the instructor blind? I replied, “Sir, yes, Sir! It was simple task, Sir! I don’t know why the other guys are having so much trouble with this, Sir.”

“Mr. Tatum, why do you think the other team members are pointing at your puzzle?”

“Sir, I guess they are in awe of how fast I completed my puzzle, Sir.”

The instructor then said, “Guys, Mr. Tatum’s performance caused all of you to be captured by the enemy. All of you are now prisoners of war. Your team failed the test and the future looks grim! Mr. Tatum failed to use his God-given talents to help the team.”

The instructor then proceeded to explain to the class the results of my actions, or lack thereof. I felt as though lightning had struck the foundation of my perception of the TEAM concept. I was devastated—my poor judgement and performance caused our team to fail. I failed the team!

As it turned out, my puzzle had five pieces that were necessary for the others to complete their puzzles. They each had one piece that would fit perfectly into my puzzle if we exchanged one piece. The only way to complete the six puzzles was for me to exchange one piece with each of them. 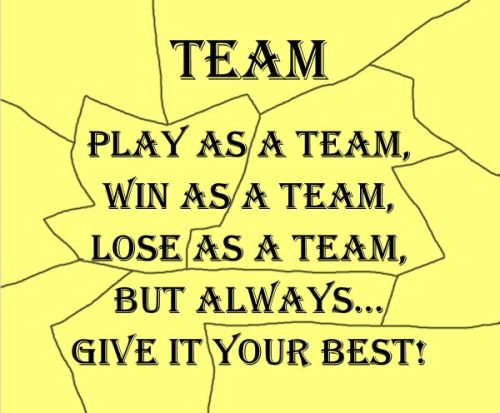 The instructor came to me after class and said, “I know you’re feeling down on yourself, but don’t. You were “setup” to fail, which actually made the exercise a successful learning experience. It didn’t matter which one of you had the ‘key’ puzzle. Any of the other five would most likely have failed also. I’ve given this exercise to hundreds of people and they have all failed.

“Before the exercise started, I told the others you had one piece of their puzzle and they had one of yours. Their task was to convince you to exchange your piece for their “bad” piece. They all failed to do that, which accomplished the second objective of the exercise—failure of each individual. Had all of you completed the puzzles, there would be no lessons-learned.

“Remember my instruction to all of you—no talking, but gestures were acceptable. I didn’t place any restrictions on the type of gestures that were acceptable. Nor did I say the team players couldn’t ask me questions. Had each team member simply asked me if they could walk around the table and exchange their “bad” piece with you, all puzzles could have been completed. You were on the hot seat today by design, but the other five will have their turn there tomorrow. Rest well tonight, son. You did exactly what I expected you to do.”

The first lesson-learned was simply being part of a team is not enough. It takes much more than that. Each member must give their best and work for the good of the team in order for the team to be successful. When one player doesn’t support the others, the entire team will likely fail.

The second lesson-learned was a good team leader looks after all team members by anticipating their needs and making sure they have all the tools necessary to complete the task at hand. Help those who are struggling is a must. You should always believe in yourself and your abilities. However, when you start thinking that you are the shining-star and your teammates are useless, your mind closes to the needs of others. Your God-given gifts no longer serve the team—you become selfish.

The third lesson-learned was to be open-minded—think outside the box and do not impose unnecessary restrictions on yourself or the team. Examine each situation and consider ALL alternatives available to complete the task. Do not limit the possibilities that can lead to success.

I failed on all counts, but I learned those three valuable lessons in the process. Since that day, I have always given my best to support the team and all my teammates. Although the team may still fail, it won’t be because I failed to give one-hundred percent of my best. Self-imposed failure is not an option!

Two are better than one, because they have a good return for their labor: If either of them falls down, one can help the other up. But pity anyone who falls and has no one to help them up.

Tagged all for one one for all, failure, faith, God-given talents, leader, lose, success, team, team building, teammates, win, youth