ANGEL AND THE SILVER DOLLAR

There are times in life when we find ourselves in situations that we can’t explain while it is happening. I experienced such a moment when I was a young boy. It wasn’t life threatening, but it was certainly surreal. It was a special moment—one I can still visualize it as if it happened yesterday. However, it occurred fifty-six years ago.

So, what brings about such moments as this? Well, it’s simple when we understand that sometimes in life there are forces far more powerful than ourselves helping us accomplish feats that are beyond our abilities. Allow me to explain the moment I experienced.

When I was a youngster, I was very shy. I never liked being the center of attention—NEVER! I just wanted to do my own thing without any fanfare from others.

At age eleven, I had the honor of being one of fourteen players selected for the 1960 Orangeburg Little League All-Star baseball team. That in itself was a major milestone for me because there were many talented twelve-year olds who also played during the regular season. I was very fortunate to have some of the coaches recognize my ability to play baseball. However, unknown to them, their confidence in me set in motion the unusual event that was about to unfold. 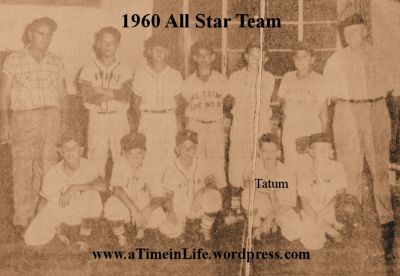 What I didn’t know at the time was that this was going to be a defining moment in my life—both athletically and spiritually.

I was the starting centerfielder in the first Little League All-Star game in Barnwell, SC. To say starting the game surprised me would be an understatement. Anyway, I took the field with butterflies flying around in my stomach to the point I felt as if I was going to hurl my lunch before the game started, but, thank goodness, I didn’t.

The game had gone great for our team and we had a one-run lead in the bottom of the last inning. Then, momentum swung to the other team and they had men on second and third base with one out. I stood in centerfield with a lump in my throat and prayed, “Lord, please don’t let the batter hit the ball to me.” That’s not exactly what an “all-star” player should be thinking at such a time.

Unfortunately, for me, God didn’t respond to my innocent-childlike prayer the way I had hoped He would. On the very next pitch, the batter hit a hard line-drive straight toward me—the most difficult trajectory and direction for an outfielder to catch the ball.

I ran toward the ball and caught it just above my shoelaces for out number two. The runner on third base tagged up and headed toward home plate. If he scored, it would tie the game. If my throw was off-target, the runner on second base could also score and we would lose the game. Without hesitation, I reared back and fired the ball toward the catcher. It was a perfect strike, and the runner was out by two strides. It was a double play, and the game was over. We won the game!

I couldn’t believe my eyes! I had never thrown a runner out at home plate from centerfield in my life. The fans went wild and cheered louder than I had ever heard before. As I ran off the field, my teammates gathered around me and celebrated the moment—the victory and the throw! Though there were not thousands of fans in the stands that night, it sure sounded like it to me. To say the least, I was happy for what happened, but I also wanted to hide.

I was shocked by what I had just accomplished. The moment was truly surreal. I thought, “Did I really do that? Was I dreaming? How did that ball leave my hand and hit the catcher’s mitt for a perfect strike from centerfield?”

That’s when I paused and said, “Lord, You didn’t answer my prayer the way I wanted, but thank You for blessing me with an angel to guide my throw to home plate.”

After the game, the father of our pitcher came over to me and congratulated me for my unbelievable throw. He said, “That was a great throw, Tatum! An awesome play like that deserves a reward. This is for you.” That’s when he placed a silver dollar in my hand—the only money I ever received for playing baseball.

I’m sure you can imagine the joy I felt that night, but I knew I didn’t make that throw on my own. An angel assisted me on the field that night, and yet, I received a silver-dollar reward for “our” effort.

It is the special moments in life that make you smile, and this moment has put a smile on my face for over fifty years. Have I ever told my grandchildren this story? Sure, I have! Many times, and I smile every time I tell the story. In fact, I’m smiling right now!

Here’s the amazing finale to the story. I tried throwing a ball in similar situations at practice more than a hundred times and never made that play again. Without any pressure of a real-game situation, I couldn’t repeat the “magical” throw.

I’m sure the Lord has more important concerns than helping a young boy throw a ball to home plate, but I also know I could never have made that throw on my own. Then again, what if…

Jesus looked at them and replied, “This is impossible for mere humans, but for God all things are possible.” – Matthew 19:26

So, what do you think happened that night? Did I suddenly have powers far beyond my abilities or did an angel assist me? No one could be that lucky.

I’m sure you have also had similar moments in your life. Would you care to share one of your special moments when you accomplished something beyond your capabilities?

Blessings to you and yours, and have a great day!